This is AWESOME!  A first of its kind and history in the making.

Seattle DJ ‘s will do battle against NYC DJ ‘s for turntable.fm supremacy, with an accompanying Dance Party physically and virtually both in Seattle and NYC.  The fun begins at 8pm and will go to 1am the next morning in their own respective timezones.  They will time shift the battle, so NYC will start at 9PM EDT and go ahead and Seattle will begin at 9PM PDT. After the event the winners will be posted on the Turntable Battle leader board.

Anyone not in Seattle or NYC can go to turntablebattle.com on July 28th to join in and listen to the two battle rooms .

Here are some event details:

Tickets for the Seattle event are on sale here.

Tickets for the New York event are on sale here.

DJs who will be involved in NYC are posted here:

DJs who will be involved in Seattle are posted here: 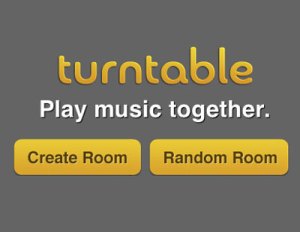 What is Turntable Battle?

Turntable Battle (TTB) is a site that focuses on bridging the physical and virtual worlds of DJ Battles and dance parties using turntable.fm.  They host multi-city events across the world that pull music enthusiasts together both in dance clubs and virtual dance rooms. TTB wants to elevate and extend the user experience by letting people know which DJs are on-top of the leader-boards, providing interactivity between two different venues during an event as well as highlight fresh, innovative music from up incoming music producers and DJs.

Founder Ali Daniali has a vision of using Turntable.fm to transform the current DJ industry.  “I envision TTB just getting better every time we put on an event that moves attendees and engages them in a way they haven’t before. We feel that if we can put on events that people can’t get anywhere else, they will come back for more!”

Talk about innovation being the mother of necessity.  “TTB came out a need I had when I wanted to attend a NYC dance party and the flight was around $800. So I said to myself I’ll just have my own dance party!  Then I had the next epiphany, to pit us against NYC in a DJ Battle.”

During the event attendees within the virtual world on turntable.fm have the opportunity to AWESOME the DJ, giving them a point. You can only vote once for each DJ playing.  TTB will tally the points for each room and announce the winning city on the turntablebattle.com website.  Winning DJs get exclusive prizes from TTB.

The Seattle event will have one DJ selected from a DJ Battle which happened exclusively on turntable.fm this past week.  The tournament had 5 rounds, with the first four events pre-qualifying DJs for Round 5. The winner of Round 5 will move on to perform either on-stage or virtually at the main event on the 28th.  Information about the on-going DJ Battle can be found here.

Daniali is excited at the prospect of Turntable Battle and looks forward to putting on others around the nation.  “My focus now is to build a meaningful company that produces events at very high quality level that bring people together and makes them happy.”

He is thinking about doing some of these battles next – LA vs. Vegas or Denver vs. Dallas or Atlanta vs. Miami.  You can vote on these soon on turntablebattle.com.

2 thoughts on “First Ever: Seattle vs NYC DJ Battle And Dance Party on Turntable.fm This Thursday Night”