As of today Pinger, the #1 free texting provider in the U.S. is going international.

The company who has quietly become the 7th largest mobile carrier in the U.S. will begin their European rollout in Germany with its new Pinger SMS Free app for iOS and Android.  Pinger SMS Free operates within the current mobile eco-system—users receive a local German Pinger number and can text for free with any German mobile phone.

The ambitious six year old startup has set its sites on one of the worlds largest markets and will attempt to lead the way toward enabling free worldwide mobile communications. “The worldwide mobile business is a $1 trillion dollar industry with 5.5 billion subscribers, and all those billions of subscribers have one thing in common: they think they pay too much for their phone service.”

Pinger exploded onto the mobile scene by providing users in the U.S. with a real phone numbers and free mobile communications.  Their revolutionary Textfree products have been downloaded by tens of millions of iPhone, iPod Touch, iPad, Android, and Web users.

In an interview, Pinger CEO and Co-founder Greg Woock explained to me how Pinger sits on top of and disintermediates the carrier to enable a whole different class of devices to freely communicate, essentially becoming phones.  By doing so they open up an entirely new approach to mobile communications.

The obvious question is how can they provide free text and voice in the EU?  Their solution: Gamification.

We Have Cracked The code of European Mobile Economics

Pinger developed a patent-pending technology to allow anyone to exchange text messages for free in Europe.  This new technology ensures that no end user sends more texts than he or she receives.  “We created a governor, a meter which matches the inbound and the outbound flow of data between carriers.  And then we and gamified the experience.”

By keeping texting volume symmetric, overhead costs are eliminated for Pinger, allowing the company to provide this free service to anyone. “The meter is dead center on the UI and it keeps track of points – when someone sends something, it goes down and when someone receives something it goes up.  It’s a dead simple solution.”

This symmetry model also works for voice calls, which Pinger plans to bring to Europe later this year. 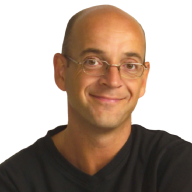 Pinger’s growth, profitability and economics are staggering. They have over 15 million Textfree users and 11 million phone numbers have been given out in the U.S alone.  The traffic between those devices is incremental, meaning they add additional revenue to mobile operators.   Woock estimates more than $25 million dollars are being generated for the carriers by Pinger because extra devices like iPods and iPads are now becoming ‘phones’.

The number of texts Pinger serves per month will reach 1.7 billion soon and they have become the largest mobile advertiser in the world showing well over 2 billion ad impressions per month.  Most amazingly, they are now considered the number 7 carrier in the US and this international play only shows their goal is to be a major player in global communications.

“The expansion will start in Germany with every possible operator, and we’ll focus on text first in order to make sure the symmetrical trading actually works” says Greg.  “We will be neutralizing costs through symmetry and then roll out across Europe later this year”

The Future of Mobile Communications is Blown Wide Open

GigaOm recently noted mobile is now 2% of GDP.  They also touched on how overall revenue is on the rise for mobile data, but in general the price for voice minutes and everything else is on the decline. Meanwhile demand for data is rising by four to six times per year as more people get smart phones and add more mobile devices such as tablets.  More and more data is being created every day, but at lower and lower prices per unit.

So what happens when a new company slides in and offers text and voice communications for free?  Most likely, data margins approach zero as illustrated in the image below. 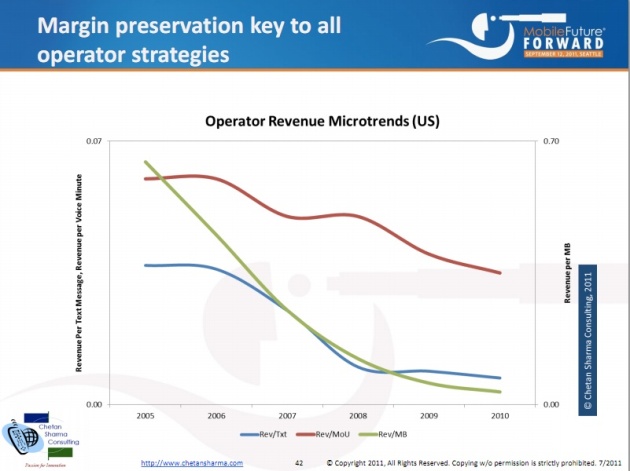 “Carriers will still be important but they are going to have to evolve” says Woock.   AT&T, Verizon and others are going to need to shift and set their sites on making the most of what they have.  Incidentally, it looks as if they won’t have much data revenue in the future.  They should think about being a smart pipe (versus a dumb pipe) and understand they always have something of value flowing through their pipes.  Monetizing those channels involves having vision and foresight into becoming more network centric to take advantage of peripheral markets, such as payments.

Pinger is positioning themselves perfectly to ride the coming mobile wave.  Mobile devices recently exceed traditional computers in unit sales and revenue.  Mobile data traffic is increasing at an exponential rate and will be 95% of global mobile traffic by 2015.   Pinger understands all these devices will be wifi and web connected and is positioned to enable mobile communications at unprecedented levels.  Indeed, we will see more changes in the next 10 years than in the previous 100.

When asked about the future of mobile communications, Woock simply said, “Big changes are coming…  it will be a massive musical chairs and I don’t expect the same people to be sitting when the music stops.”

AT&T and Verizon, can you hear me now?

Pinger is uniquely poised to restructure the end-user cost for mobile communication due to the company’s massive scale, unique local phone number model and new gamification technology that works within the context of the highly-regulated European mobile market.

The company’s European expansion will begin next month in Germany with its new Pinger SMS Free app for iOS and Android. Pinger SMS Free operates within the current mobile eco-system—users receive a local German Pinger number and can text for free with any German mobile phone.

“The consumer price of mobile communications in Europe is too high, and for years various companies have been trying to figure out how to make phone number-based mobile communication free,” said Greg Woock, CEO and Co-Founder of Pinger. “Pinger has changed the game by bringing completely free mobile calling and texting to Europe in a totally unique way. We simply neutralize the high costs for consumers while the carriers still make money.”

Pinger has developed a patent-pending technology to allow anyone to exchange text messages for free in Europe. This new technology ensures that no end user sends more texts than he or she receives. By keeping texting volume symmetric, overhead costs are eliminated for Pinger, allowing the company to provide this free service to anyone.  This symmetry model also works for voice calls, which Pinger plans to bring to Europe later this year.

“The worldwide mobile business is a $1 trillion dollar industry with 5.5 billion subscribers, and all those billions of subscribers have one thing in common:  they think they pay too much for their phone service,” said Joe Sipher, Chief Product and Marketing Officer and Co-Founder for Pinger. “We can now spread free mobile communication to a wide audience with this simple, yet brilliant twist that combines a symmetry-driven gamification system with an existing mobile infrastructure using real local phone numbers.”

By providing its users in the U.S. with a real phone number and free texting and talk time, Pinger has quickly become 7th largest U.S. mobile carrier and recently surpassed 50 million downloads across its platforms:

“We’ve received tremendous industry support, because our Pinger communications apps generate approximately $25 million in revenue per month for other carriers,” said Woock.  “We give people who weren’t formerly using text messaging real phone numbers and the ability to text with anyone, including friends and family on other carriers, who are paying for messages.”

Pinger Textfree also enables free unlimited text and picture messaging from the U.S. to over 18 countries, and Pinger Textfree with Voice supports free calling within the U.S. on iPhone and iPod touch.

Pinger SMS Free will be available in Germany via the iTunes App Store and the Android Market later this summer.

Pinger makes texting and talking free. Our market-leading communications products have been downloaded by millions of iPhone, iPod touch, iPad and Android users around the world. Pinger is loaded with inventive people who enjoy creating consumer products and services that make a difference in people’s lives. www.pinger.com