I had a few great conversations this morning and although they both happened independently there was a similar theme to the conversation.

I found myself thinking “I would rather be a player on the field than sitting on the sidelines.”

We were talking about how its such an awesome time in our society and such a great time to build a technology company, and the thought just hit me.   I don’t want to be 50 yrs old siting there reminiscing about how back when I was 20 people started walking around with these things called cell phones.

“Son, back in my day them people used to dial a number and actually talk to someone through that there handset” I imagine I would be saying to my kids.  “now look at all the things you kids do on those damn things.  If I would’ve just been a little smarter and started something of my own I would been a millionaire… “

NO.  I would rather tell my kids “…. and you know what, I chose to jump into the game and ride the wave of innovation rather than watch it go by.  And It’s the been the best decision I ever made!” 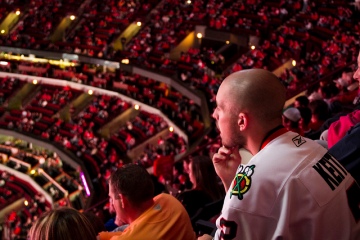 Being a player means actually getting your butt off the sidelines and into the game.  It takes a lot more energy for an athlete to play in the game than for a fan to sit a watch.  And you wonder why athletes are paid so much money?  Ever try to get out in front of millions of people and catch that touchdown pass before it flies by your head in a split second… its tougher than you think.

It also takes courage to put yourself out there and compete in the game of business.  Yes, you might fail.  Yes, you will probably screw up the play.

Yet, it’s 100 times better than being a monday morning quarterback like all media outlets tend to do.   And at least you are out there making something of yourself and hopefully adding value to the world.

It seems funny to me how crazy excited and into professional sports some fans get.  What do they actually gain when their team actually wins?  Besides beating the Vegas odds, not much.

Being a player is tough but it’s also way more exciting.  Have you ever thought about what happens if you actually succeed?  Who knows… but indeed it will be more than the satisfaction of your team beating the other team on any given Sunday.

Look at those two images and ask yourself which one you want to be.

One thought on “Playing The Field Vs. Sitting On The Sidelines”